In December 2012, I was award an MS in ECE. My focus was in telecommunications. After learning this, an acquaintance asked me to explain what telecom is. I think I might have gotten the highlights of the field across to her, but it wasn't as easy as I had hoped. This series of posts is dedicated to explaining the basics of telecom as simply as possible.

If you're sending data as quickly as you can across some medium (telephone wire, coaxial cable, etc.), modulation schemes let you send more data across the line without using any extra bandwidth. There are limits on how many symbols you can transmit each second. (This limit is determined by the bandwidth of the channel you're using to transmit your data.) If you're clever you can send data more quickly without using any extra bandwidth by choosing the right modulation scheme.

This solution is slow! It would take over a minute just to ask "how are you doing?" One way to speed this up would be to show two cards per second, but that's hard to do by hand. Another way to speed up our messages is by sending two "dots" or "dashes" with each card we hold up. How? Add more colors to our collection! 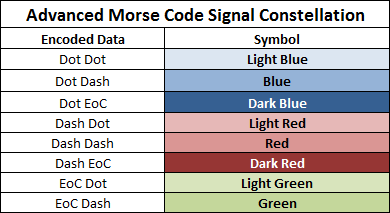 Now with our advanced modulation scheme we can send messages twice as fast. It only takes 10 seconds to say "hello"!

The beautiful part of modulation schemes is you can switch between them at will! If the sun has set and it's difficult to tell blue from green, switch to the basic modulation scheme. Your messages will take longer to transmit, but you can be more certain that they arrive at their destination without error!

Photo of the Arecibo Observatory by H. Schweiker/WIYN and NOAO/AURA/NSF