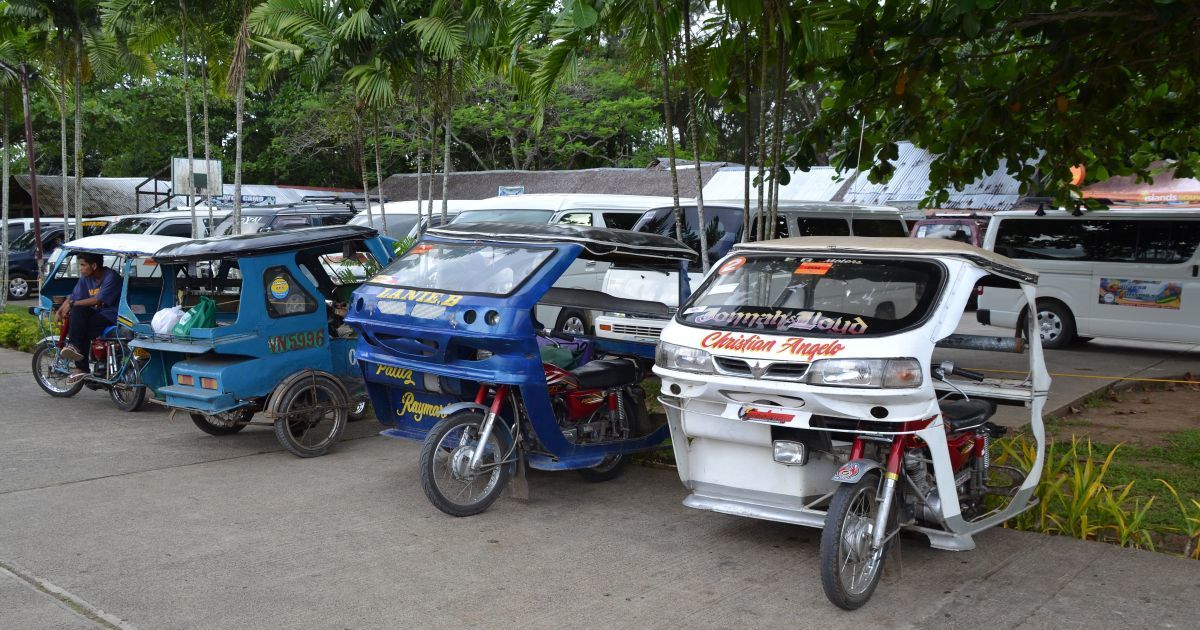 Public Transportation in the Philippines Part 2

Trikes are a very common form of transportation in cities in the Philippines. Trikes are motorcycles with sidecars attached. Small trikes can seat one large passenger or four to six small passengers. Larger trikes can seat up to four large passengers in the sidecar. Trikes generally queue in trike stands like taxi stands in America, but you can also hail them from the side of the road if they don't currently have a fare.

Trike fare is between 15 and 60 pesos depending on the size of the trike, the distance you're going, your ethnicity, ability to speak Tagalog, and haggling skills. They're not particularly safe, but they'll get you where you're going. Be sure to agree upon a price before departing to avoid any misunderstandings or conflicts.

Walking isn't a great idea. It's so cheap to use taxis or trikes that the hassle isn't worth it. Sidewalks are generally blocked by parked cars or vendors forcing you to walk in the road.

I walked a block in Manila to a Wendy's. Just before entering, I was quickly surrounded by a swarm of children asking me for money. I had already placed my wallet and phone in my front pockets. When I saw them approaching me, I put my hands into my pockets to hold onto my things. That was a good idea; I felt one of them stick their hands into my back pockets.

Taxis generally fall into two categories in Manila: metered and bartered. I've heard that other cities that get fewer foreign tourists such as Baguio only have metered taxis.

The price for a metered taxi is extremely low. I don't remember the exact rates, and I neglected to take a picture of the rate schedule while I was there. I once took a several-hour trip across Manila in rush hour traffic that ended up costing me less than $20, I think.

Since the metered rates are so low, many taxi drivers attempt to barter with their clients. This general works in two ways: 1) all of the drivers in an area agree not to use their meters are refuse to take you anywhere if you insist on using the meter, or 2) they tell you that their meter is broken. In areas where there are many tourists, taxis will congregate and collude to force you to pay a higher rate than you would with the meter.

I once had a driver show me a laminated piece of paper that said "metered rates" at the top when I asked him to use the meter. That was pretty ridiculous. The rates are on paper, so they can't change based on where he picked up his fare. Obviously he had been showing that card to a lot of people. Having made the same trip many times, I knew that I could haggle him to a much lower price than what he had shown me on the card, and I did.

Another time, I hailed a cab on the side of the road. His meter was clearly working, so I asked him to use it. He said it wasn't working and tried to keep driving. I told him I wouldn't pay unless he used the meter, so he let me out on the side of the road. I forget exactly how much he had asked for. This happened very early in my stay in the Philippines so I wasn't able to determine if the price he was asking was reasonable or not.