Modding a Franklin R850 Wifi Hotspot for a Car

I just got a new car with Android Auto, and I'm doing a little bit of work to make it work the way I like. The first problem with Android Auto is that it (mostly) requires a data connection for navigation. In this post, I add a hotspot with free data to my car that turns on and off automatically with my car.

I don't want to use my phone's data because I don't want to pay for more data. To get free data, I just signed up for FreedomPop and got one of their cheapest hotspots, a Franklin R850. This gets me a measly 500 MB of data each month, but that should be enough for just navigation.

The first problem with leaving a hotspot in my car is the summer heat in Texas. The battery in the hotspot says "Do not expose battery to temperatures above 113°F (45°C)." 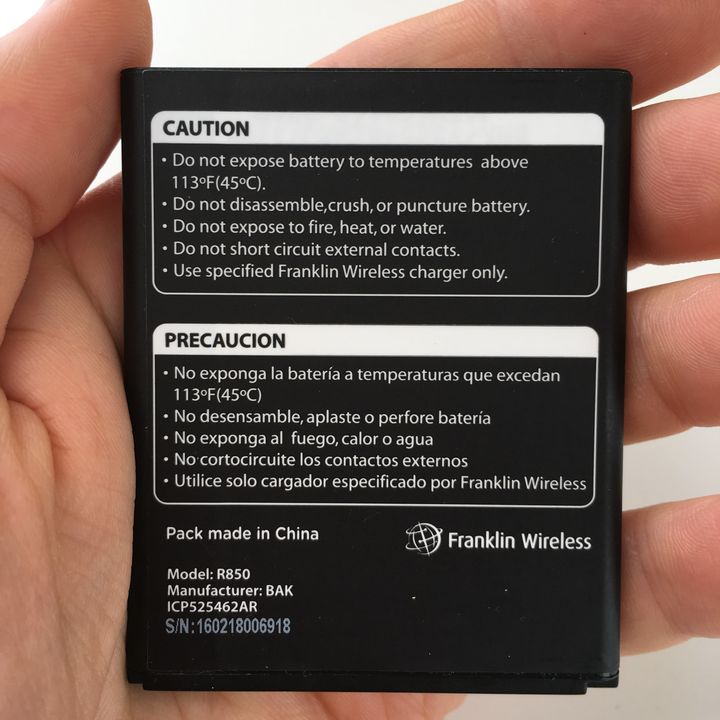 Considering temperatures in August in Dallas, where I currently live, often reach over 105°F in the shade, it's likely that any battery left in a car for a single summer would be toast. Autotrader measured the interior temperature of a car to be 113°F on a day when the outside temperature was only 95°F!

Obviously, the battery had to go. Removing the battery solves two problems: 1) the hotspot will now shut down when the car is turned off, and 2) the battery will not degrade over time due to heat.

Removing the battery was super simple, I just had to pry off the back cover and then pull it out: 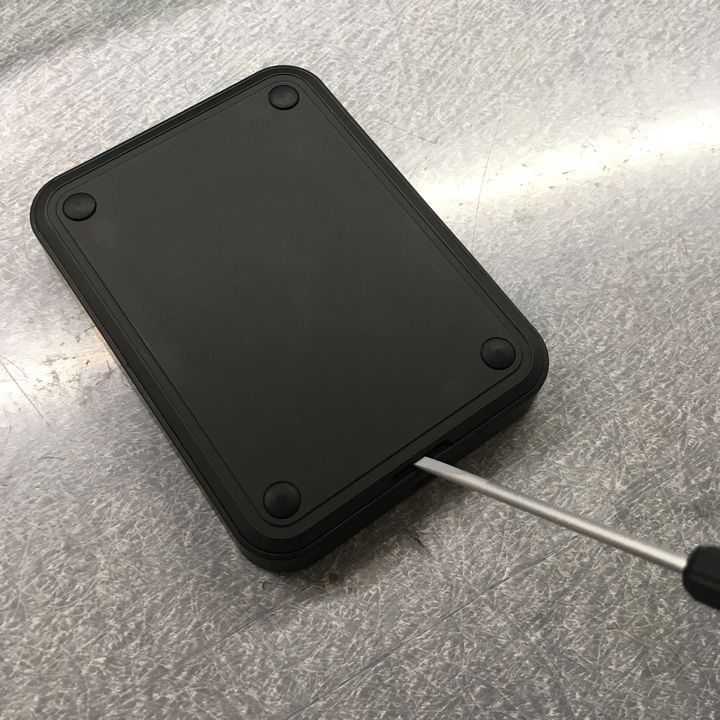 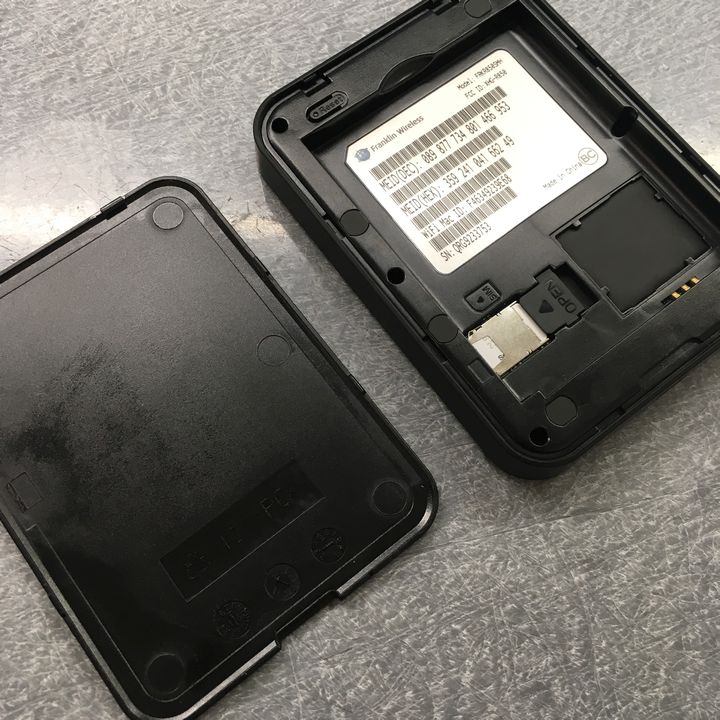 Inside the battery compartment.

Powering on with car

Next, I needed a way to power on the hotspot with the car. The hotspot powers on when it has power and the power button is pressed for 2 seconds.

Next, I decided to open up the hotspot and do a little investigation to find out how it worked. 99% of the time, buttons are simple switches that are connected to a pull-up or pull-down resistor and an input pin on a microcontroller (MCU).

Buttons and pull-up resistors from a [SparkFun Tutorial](https://learn.sparkfun.com/tutorials/pull-up-resistors).

When I opened up the R850, I was pleased to see the board had many well-labeled test points. 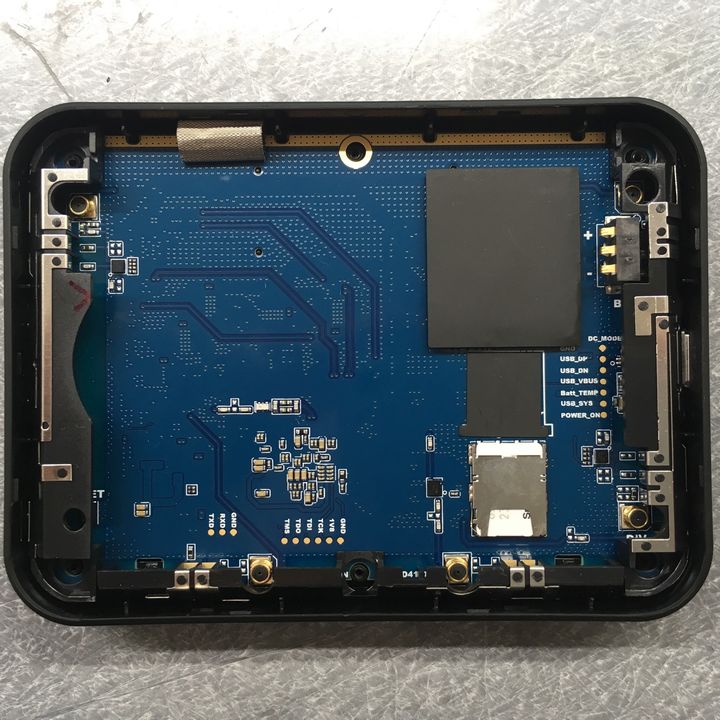 Circuit board inside the Franklin R850 hotspot.

Using my trusty multimeter, I figured out that one side of the power switch was connected to ground via a 10k resistor. (The resistor is a pull-down! It's not a pull-up!) I also found that when the power button was pressed, it connected to +5 V from the USB connector.

Luckily the three nodes I needed access to all had test points located near each other: GND, USB_VBUS, and POWER_ON. GND provides a 0 V reference. USB_VBUS provides 5 V when the R850 is plugged in to a USB power supply. POWER_ON is connected to the switch and is normally pulled low through a 10 kΩ resistor. The pushbutton on the front of the R850 connects POWER_ON to 5 V. 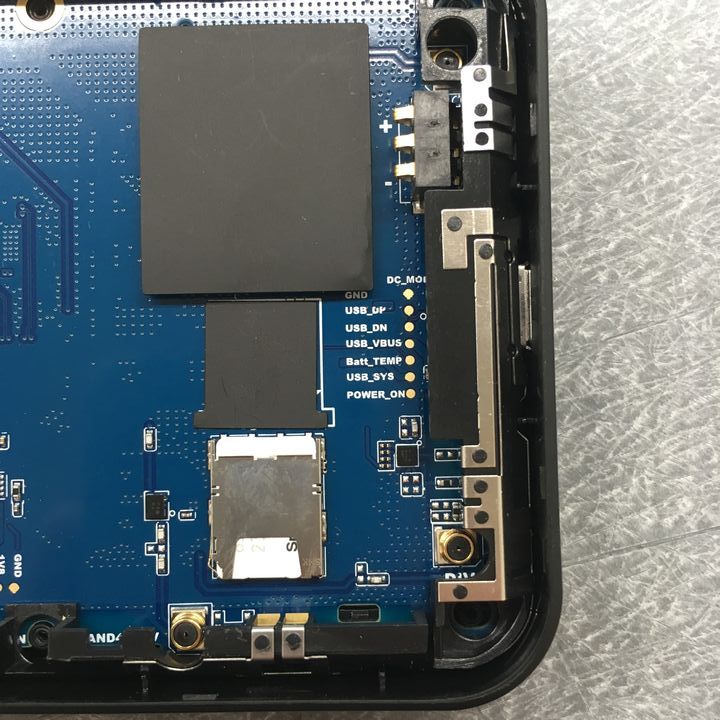 Useful test points on the Franklin R850 hotspot circuit board.

I now knew enough to get to work designing a solution. I needed a circuit that would provide +5V for two to ten seconds and then turn off. Well, that makes the output portion of the circuit obvious: It should be an open-drain p-channel MOSFET. P-channel MOSFETs provide a high voltage to their output (drain) when their input (gate) is low, and their outputs look like large resistances when their inputs are low.

If I charge a large capacitor through a large resistor, then the capacitor will slowly charge up to the supply voltage. The voltage of the capacitor is the perfect input to my p-channel MOSFET.

My proposed circuit for pressing the power button when power is supplied to the hotspot. Note: R3 is part of the hotspot and is only included in the schematic for simulation purposes.

With my circuit designed, I simulated it to make sure it would work the way I hoped it would. 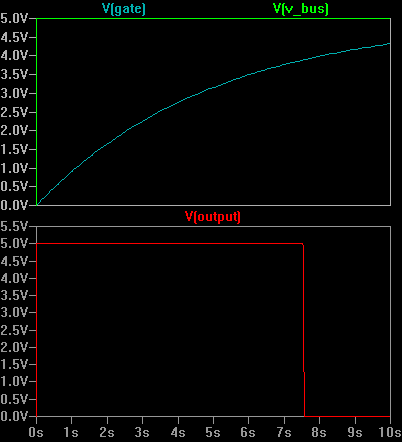 It works! Well, it works in theory. The MOSFET drives its output high for about 7 seconds and then lets the 10 kΩ resistor pull it low. After the first seven seconds, it's like the MOSFET isn't even there anymore and the physical pushbutton can be used to send signals to the MCU as normal.

Finally, I had to actually build the circuit. I picked a couple parts off Digi-Key, ordered them, and set to work.

First, I took some strip board and cut it in half with a hacksaw so it would fit in the battery compartment. I used a small clamp to hold the strip board still while I was cutting it. 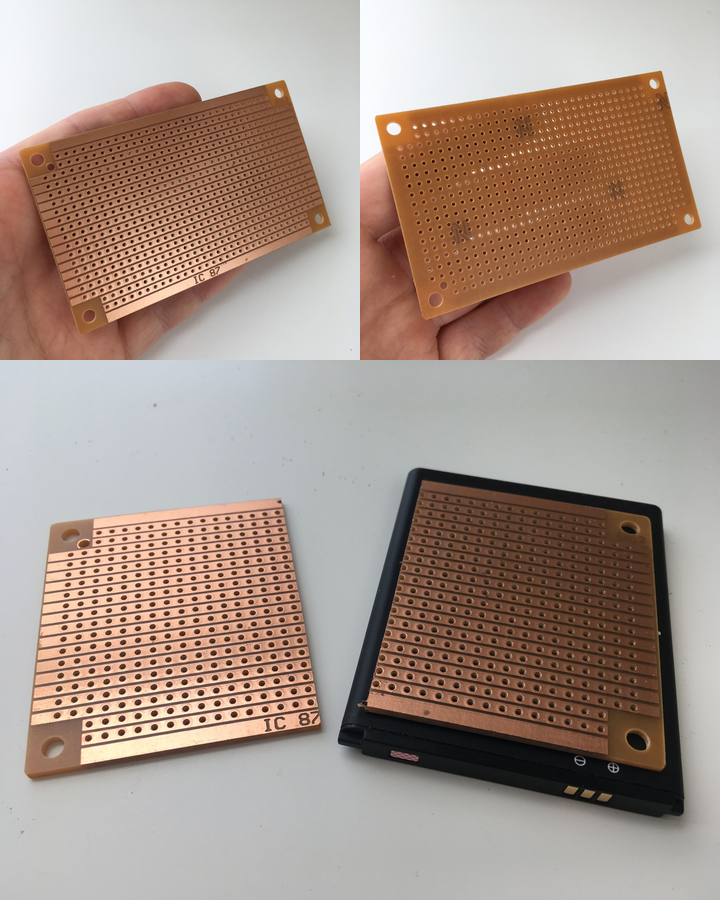 The strip board when cut in half is about the same size as the battery. Perfect!

I then soldered wires to the GND, USB_VBUS, and POWER_ON test points on the R850's circuit board and pushed them through a small hole into the battery compartment. 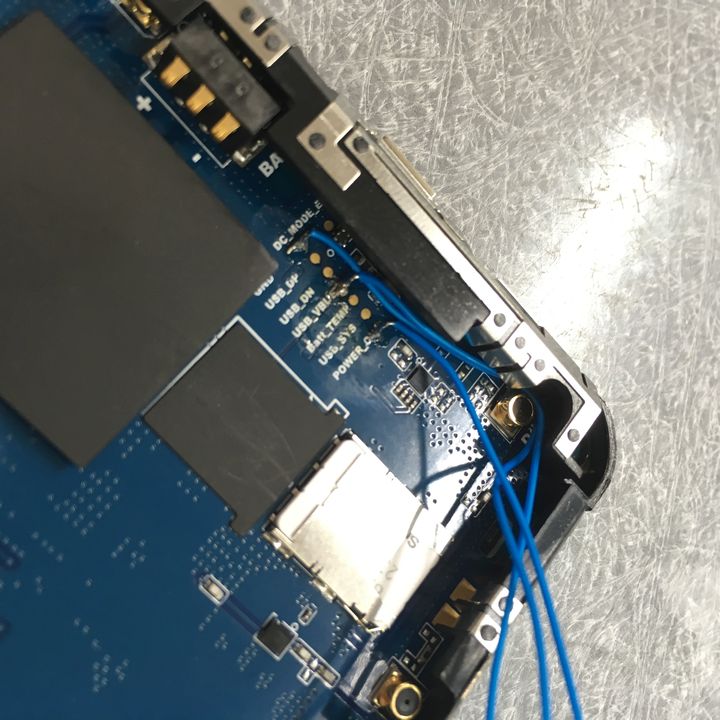 And then I built the reset circuit on the strip board. 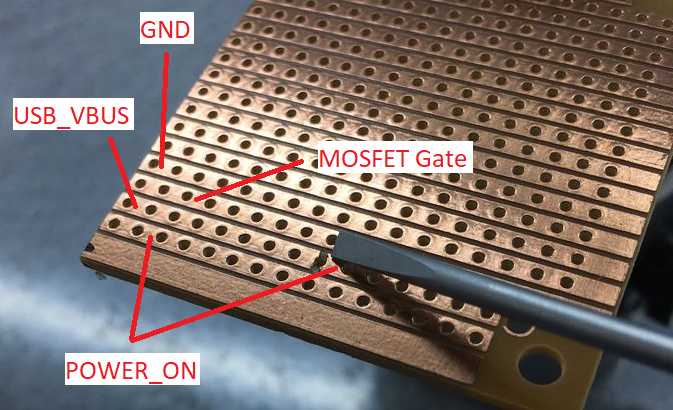 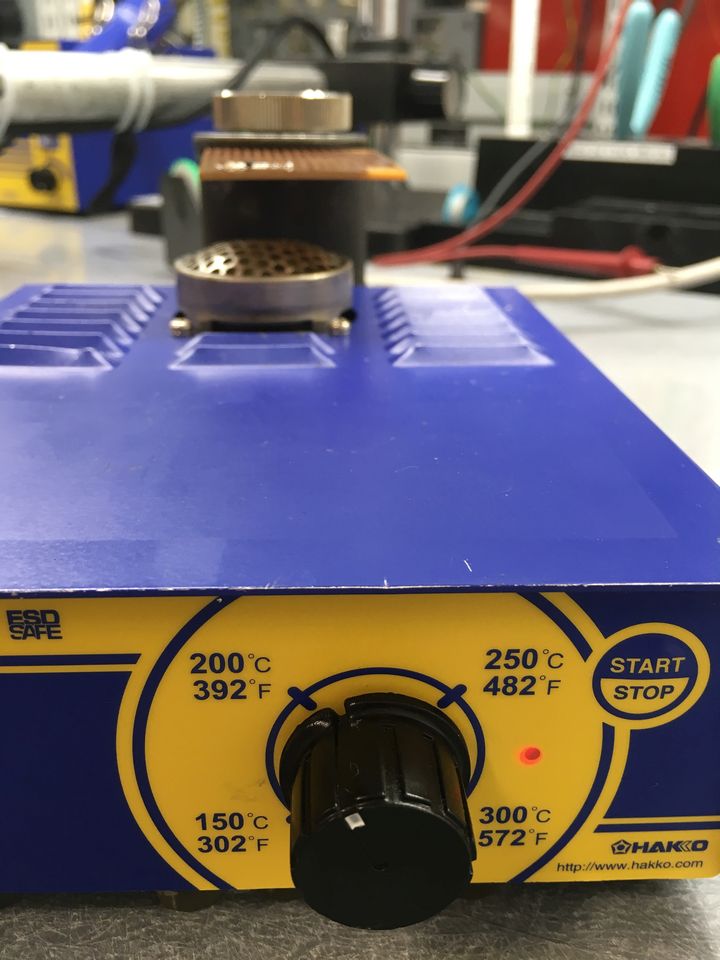 While soldering, I heated the board to 200 °C with a Hakko FR830 to make the solder reflow more quickly. 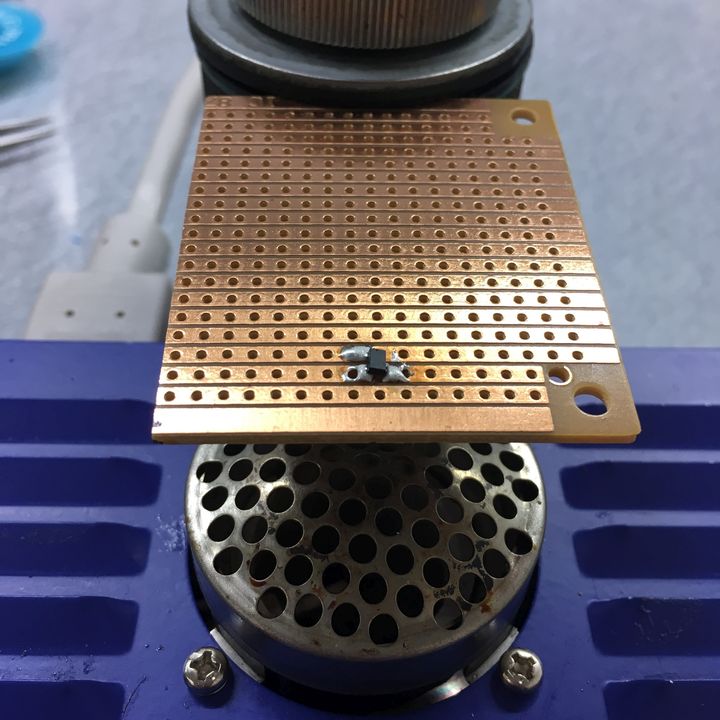 I soldered down just the MOSFET first. 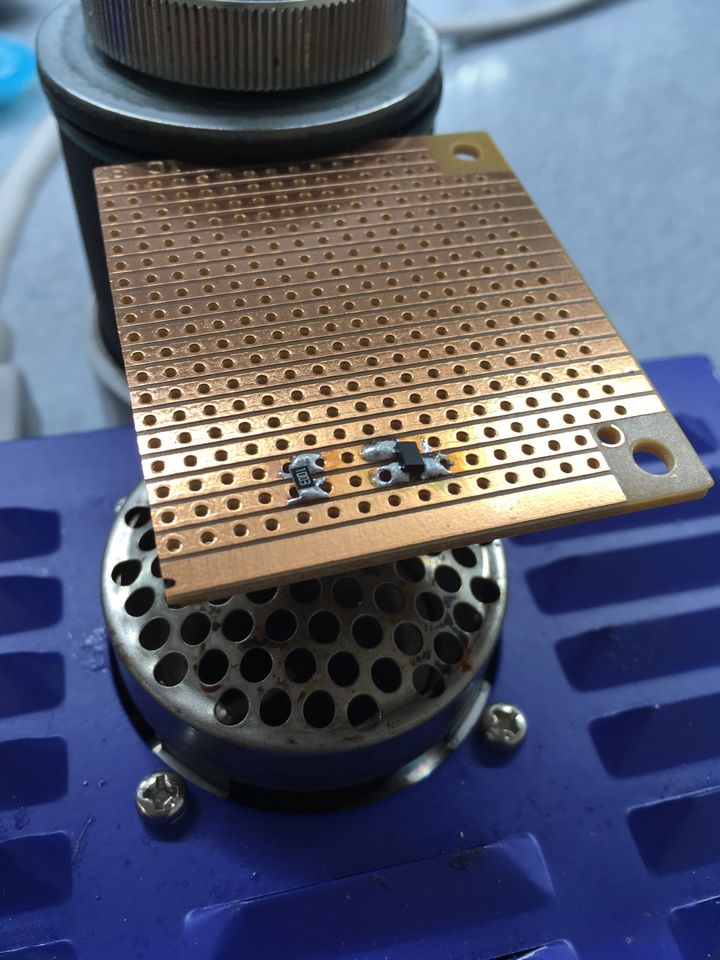 Then I soldered the 100 kΩ resistor between the gate and source of the MOSFET. 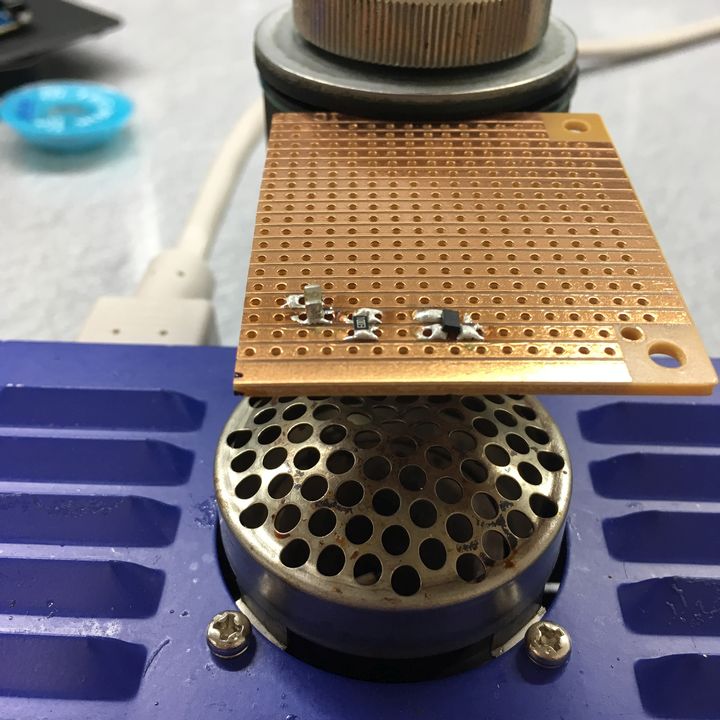 Next came the 47 μF capacitor. 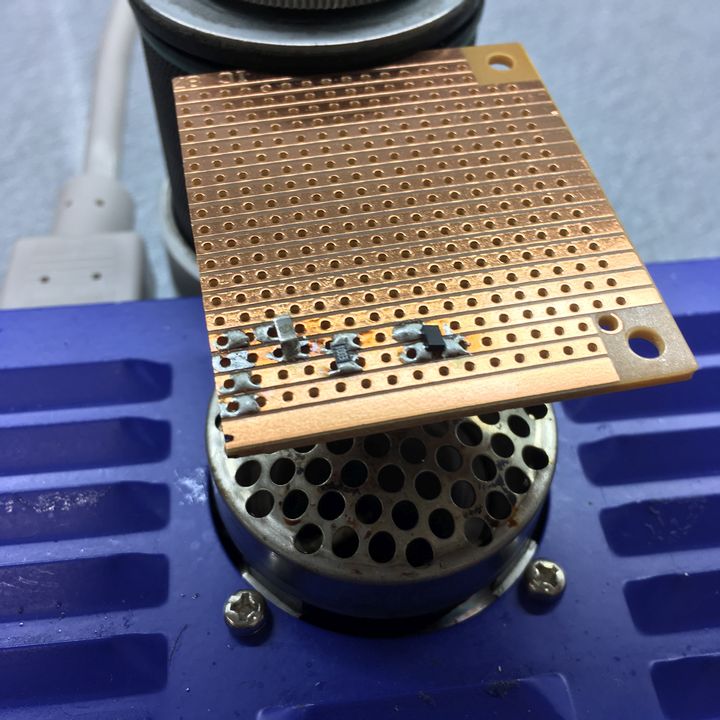 Then I tinned the three strips to which I would need to solder the wires from the R850. 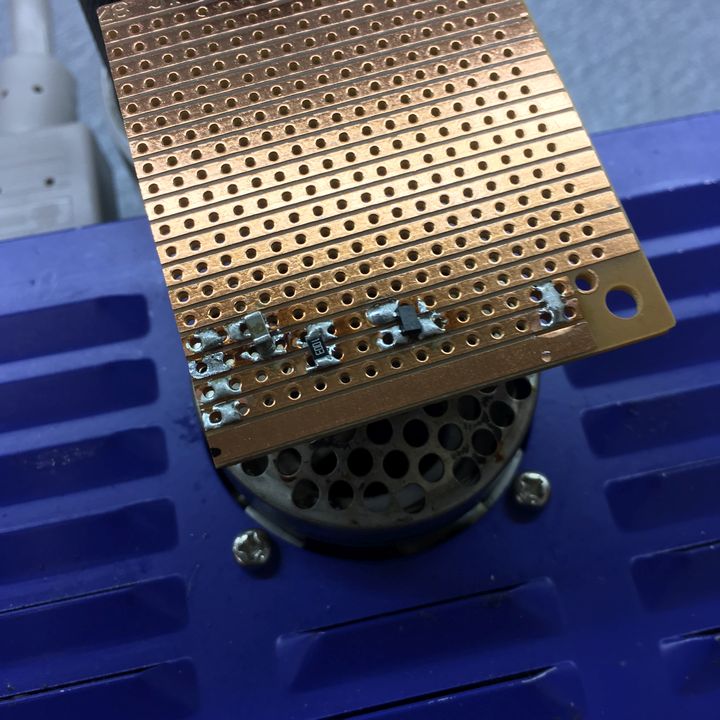 And I made a solder bridge between two strips to connect the drain of the MOSFET to the wire going to the POWER_ON test point connection.

Reassemble the R850 and poke the wires through a hole into the battery compartment. 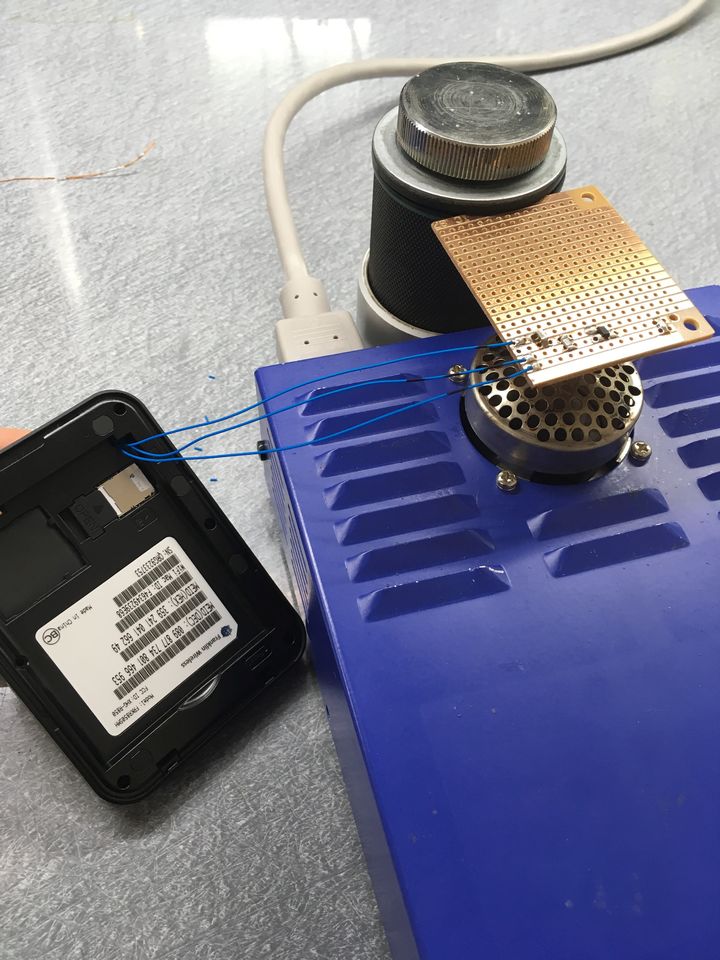 Solder the three wires to the strip board. 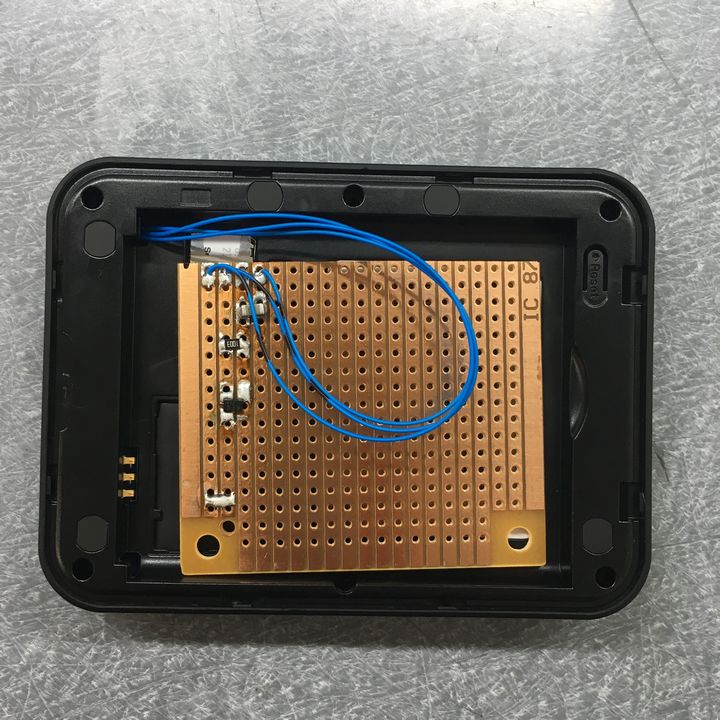 Put the strip board in the battery compartment and close it up.

After closing up the case, it was ready to test. I plugged it into the nearest power source, waited a couple seconds, and the world "Welcome" popped up on its display. It worked!

Was this information useful or interesting to you? Do you have any automobile/hotspot related hacks? Let me know in the comments!