A few days ago, CamelCamelCamel went offline due to some issues with their database. They lost a few hard drives and needed to recover the data on them. The drives were large and expensive, and the data recovery process was also pricey. To help offset the cost of this, they asked their users to donate. I'm upset about this, and you should be too.

How Does CamelCamelCamel Make Money?

CamelCamelCamel is an Amazon affiliate. They make money by linking to Amazon with special links. If you buy anything on Amazon after clicking on one of their links, CamelCamelCamel gets a cut. The percentage they get depends on the category of the item(s) you purchase: 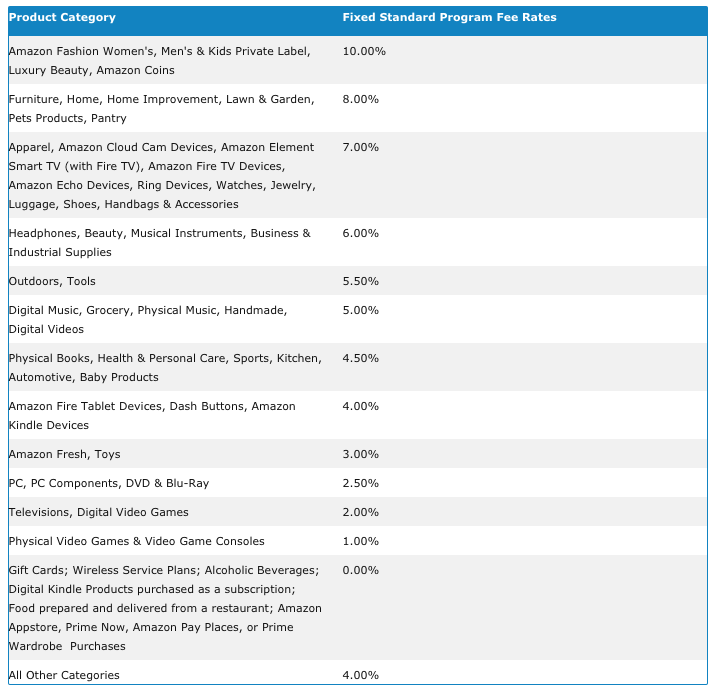 What do these links look like? In the query parameters, they have a "tag" key and value. For Pricer Pro, my tag is "pricerpro-20". A typical referral link with my tag looks like this:

How Much Money Does CamelCamelCamel Make?

Here I can only guess, but it's safe to say they should make a ton of money. I'll publish a few fuzzy numbers from my experience with Pricer Pro and then extrapolate to what I think CamelCamelCamel makes.

I launched Pricer Pro in the Fall of 2017. December 2017 was Pricer Pro's best month. It attracted about 35k unique users that month and earned about $3,500 in Amazon referral fees. I estimate my hosting costs that month were in the $100 to $200 range. (Note, all of these numbers are conservative and not real values.)

Over time, I observed that traffic was directly correlated with revenue. More users meant more money to the tune of about 10¢ per user.

I've tried to find an estimate for the kind of traffic that CamelCamelCamel gets. The best I was able to find is this chart from trafficestimate.com: 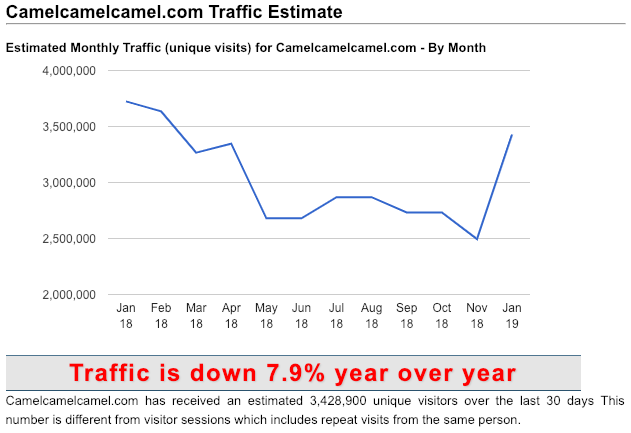 It doesn't look too convincing since Q1 is usually the slowest quarter for online shopping, but it's the best I could do. At the bottom of the chart, they claim CamelCamelCamel got around 3.4 million visits in the past 30 days. Let's round that down to give CamelCamelCamel the benefit of the doubt and call it an even 2 million visitors per month.

If CamelCamelCamel makes about 10¢ per unique visitor like Pricer Pro does, and they get 2 million visitors in a month, then we can expect CamelCamelCamel to make $200,000 per month! Of course, their hosting bills are probably proportionate to Pricer Pro's as well, so that would mean they're paying around 60 times more for hosting, or about $12,000 per month.

Alright, after taking hosting into account, we're still at $188,000/month! And that's on the low side! Pay ten employees $100,000 each annually, and you're left with just over $100,000 per month in profit! (CamelCamelCamel is operated by Cosmic shovel, and according to their website, they have only 3 developers and 4 contributors, whatever a contributor is. Their salary costs are probably lower than I estimated with a huge chunk of their profits going to just a few people.)

How Much Money Is CamelCamelCamel Probably Making?

CamelCamelCamel has way better SEO than Pricer Pro ever did. They're linked to by tons of reputable blogs and news outlets. Plus, they get shout outs on TV whenever the holidays come around, and people recommend them like crazy on sites like Reddit. I think a 60x differential in traffic between Pricer Pro at its peak and CamelCamelCamel on an average day is extremely conservative.

And hopefully as CamelCamelCamel grew, they were able to scale their site in a way that made each visitor cheaper to serve than it was for me. Economies of scale dictate that their hosting costs should be lower than mine were on a per-user basis.

Also, since CamelCamelCamel has been around longer, they've had tons of time to tweak their site to increase the average value of their users. They can make their alert emails more appealing over time, showcase items with higher referral fee rates on their front page, and leverage their vast stores of consumer data to suggest similar items to their users that are more likely to prompt them to buy something even if it's not what they were originally looking for.

With the right employees building a system like CamelCamelCamel, I'd expect to be able to draw 3 million unique visitors per month with an average visitor value of 15¢ and hosting costs below $10,000 per month. After factoring in salaries of about $1.2 million per year, CamelCamelCamel should be making just about $4 million dollars in profit each year.

Why Is CamelCamelCamel Asking for Donations?

This is the question I just can't answer. Clearly, CamelCamelCamel should be making tons of money. Have you ever heard of a for-profit company making millions of dollars of profit and also having the gumption to ask for a donation? (Yeah, okay maybe the investment banks did this back in 2009, but that just proves my point. No one likes businesses that do that.)

Also, their website has documented the speed with which CamelCamelCamel has worked to restore their service. The outage occurred on January 26th, they ordered new hard drives on January 28th, and they paid for the data recovery on January 31st. The people operating CamelCamelCamel were able to shell out $44,587.20 in only five days. (See the end of this post for a screenshot of the timeline CamelCamelCamel posted during the outage as well as their request for donations.)

Who pays $45k in five days? Do people who are running a website for fun pay that much money that quickly? No, they usually shutter the website and move on with their lives. Or they ask for some help from their community and only pony up the money when they think they're likely to get at least most of their money back through donations.

If you were asked to pay $45k, would you shell it out right away without any thought to if that money would be worth it? No, you'd most likely do some calculations and try to figure out if that was a worthwhile investment. You'd try to figure out the ROI and how much money you could earn by spending that much.

For the people at CamelCamelCamel, spending that much money was a no-brainer. It's chump change for them. Using my previous conservative estimate of $100,000 profit per month, I estimate they would miss out on about $3,000 for every day they are offline. Yes, of course they want to fix this issue as fast as possible. They're a business and being offline is killing them financially.

CamelCamelCamel is not a hobby website. They are not doing anyone a service out of the goodness of their hearts. It's a for-profit business that is doing tremendously well. They do not need donations. You should not donate to them.


← Older
How to Run Rails Database Migration Tasks on ECS
Newer →
Formatting Inputs with Cleave.js in a Vue/Typescript/Rails Project