I used to get headaches at the end of the work day almost every day. The headaches didn't happen on the weekend. My wife suggested it was stress, but I didn't think so. I'd had stressful jobs before, and they affected me differently. My current job isn't stressful.

I noticed that on meeting-heavy days, I didn't get headaches. I work remotely, so my meetings are all video calls.

When I'm not in meetings, I spend much of my working time programming. I had a two-monitor setup: one 24 inch monitor directly in front of me and one 24 inch monitor off to the left side. While programming, I'd often switch between looking at the two monitors because I'd have my editor open on the primary screen and either my Git client, my console, documentation, or the app I was working on open on the other screen.

When I'm in a meeting, I hardly even look at my second monitor. I put the meeting on my primary monitor and mostly just look at whoever is talking in the meeting.

After thinking about this for a while, I came up with a theory. I guessed that my headaches were due to neck strain from looking at my secondary monitor.

I didn't want to believe my theory was right, so I was loath to test it. At first, I tried not to put any windows no my secondary screen if I could help it. When I did that, the severity of my headaches, when they happened, was much less. Bolstered by this result, I went one step further and left my secondary monitor off while I was working. This resulted in my headaches stopping altogether.

After gathering this evidence, I realized I needed to alter my monitor setup. I can't use dual monitors anymore, and I should probably avoid wide monitors as well. However, one 24 inch monitor feels restrictive to me as I typically switch between my editor, the description of the task I'm working on, documentation, my console, and a chat or email application.

Having all of these windows on screen at the same time and partially visible helps me to visually organize my work. I sometimes use virtual desktops as well, but I find the animation that plays when switching between desktops to be too slow. It drops me out of my flow when I have to rapidly switch between several virtual desktops repeatedly.

With all this in mind, I decided to get the largest 4k monitor I could. It seems that the largest mass-market 4k monitors that are sold today are 32 inches. When I saw the price of Dell's new S3221QS monitor dropped from $500 to $400 on Amazon, I decided "why not?" I thought the price was a bit too low to guarantee a great monitor, but we're living in the future, so maybe it'll be okay?

It turns out I was wrong. While the S3221QS might be a great monitor for some people, it didn't work out for me, and I ended up returning it a couple days after it arrive. I've detailed the reasons I returned it below.

I knew that VA panels had bad horizontal viewing angles from monitors I'd owned in the past, so I should have known this monitor would be the same. When I bought it, I figured, "This is 2020! Monitors should be great now!" Sadly, that's not the case.

As you can see in the animated GIF below, the pink background on Github PRs changes color drastically depending on the angle you view it from. At a wide enough angle, the pink turns an almost blue-gray color.

For me, this is a big problem because I use both of my eyes. If one of my eyes sees a very different color from the other, it makes me feel disoriented. I was able to see this color difference very easily just by closing one eye at a time. Even that minor shift in perspective had a noticeable impact on the color. 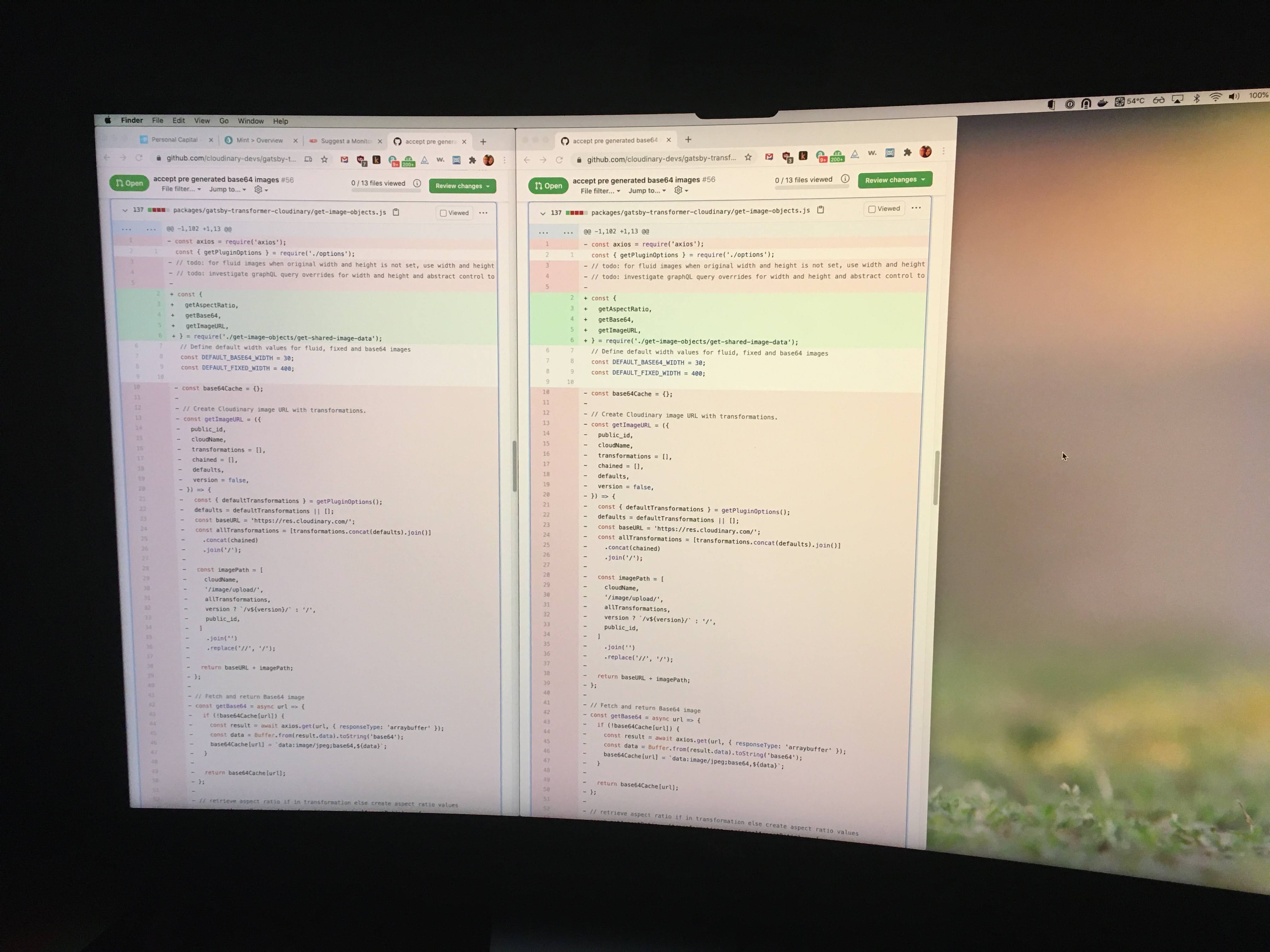 The still shot above shows the difference in color at the edge of the monitor and the center of the monitor from the position that my eyes are typically at when I work. You can see the pink in the left margin of the left PR is much less saturated than that on the right PR.

The monitor seems to be optimized for displaying dark text on a light background. When I moved a console window with light text on a dark background, I immediately noticed that all the text dimmed while I was moving the window. The text suddenly popped back to a much bolder appearance when the window stopped moving.

In the animated GIF below, you can see that all the text gets much darker when moving and brightens up when the motion stops.

The monitor comes with a setting that helps to fix this. You can adjust the response time to be either "normal", "fast", or "extreme". This does make light text on a dark background dim much less when moving. However, it has an extremely negative impact on light objects moving in front of darker backgrounds.

As you can see in the animate GIF below, moving a window leaves a weird ghost image behind in funky colors when the response time is set to "extreme". these visual artifacts are so jarring, I can't imagine anyone actually using this setting.

The monitor I received had a cluster of dead pixels in the top right corner. I think it's three dead pixels since the shape of the dead cluster is kind of L-shaped. This was the final straw for me. Maybe I could live with the two issues above since this new monitor was so much bigger than my previous one, but there was no way I'd keep a monitor that arrived with an obvious defect like this. 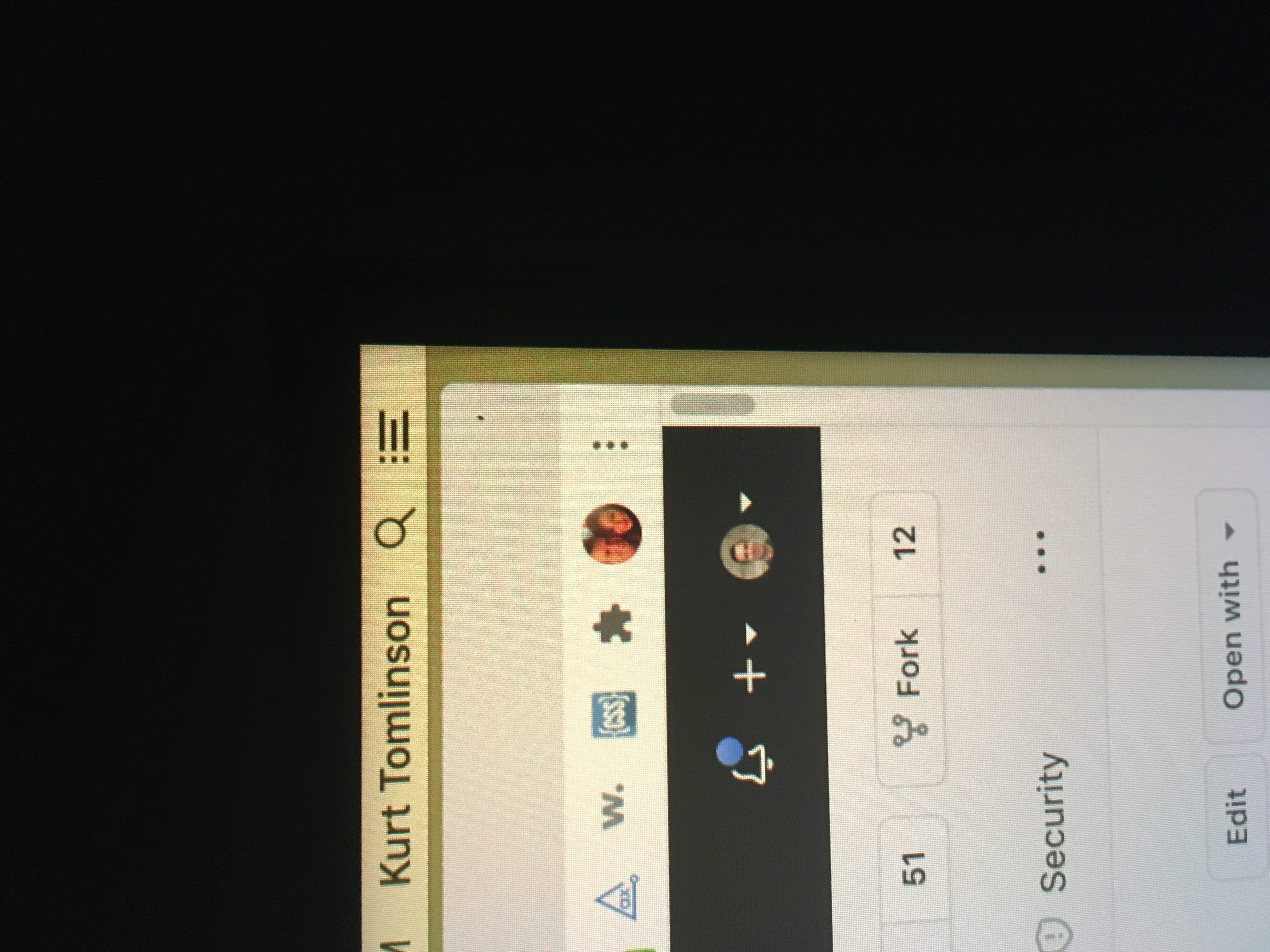 The most surprising part about buying this monitor had nothing to do with the monitor itself. When I was packing it back up to return it to Amazon, I crossed out all the shipping labels on the box. After doing so, I looked at the labels a little more closely and noticed that one label had a shipping address of Amazon.com and a return address of Dell Returns.

It seems that the monitor I bought had been returned before. I bet it was returned due to the cluster of dead pixels in the top right corner. Considering I bought this monitor "new" from Amazon, I was more than a little surprised to find this shipping label. 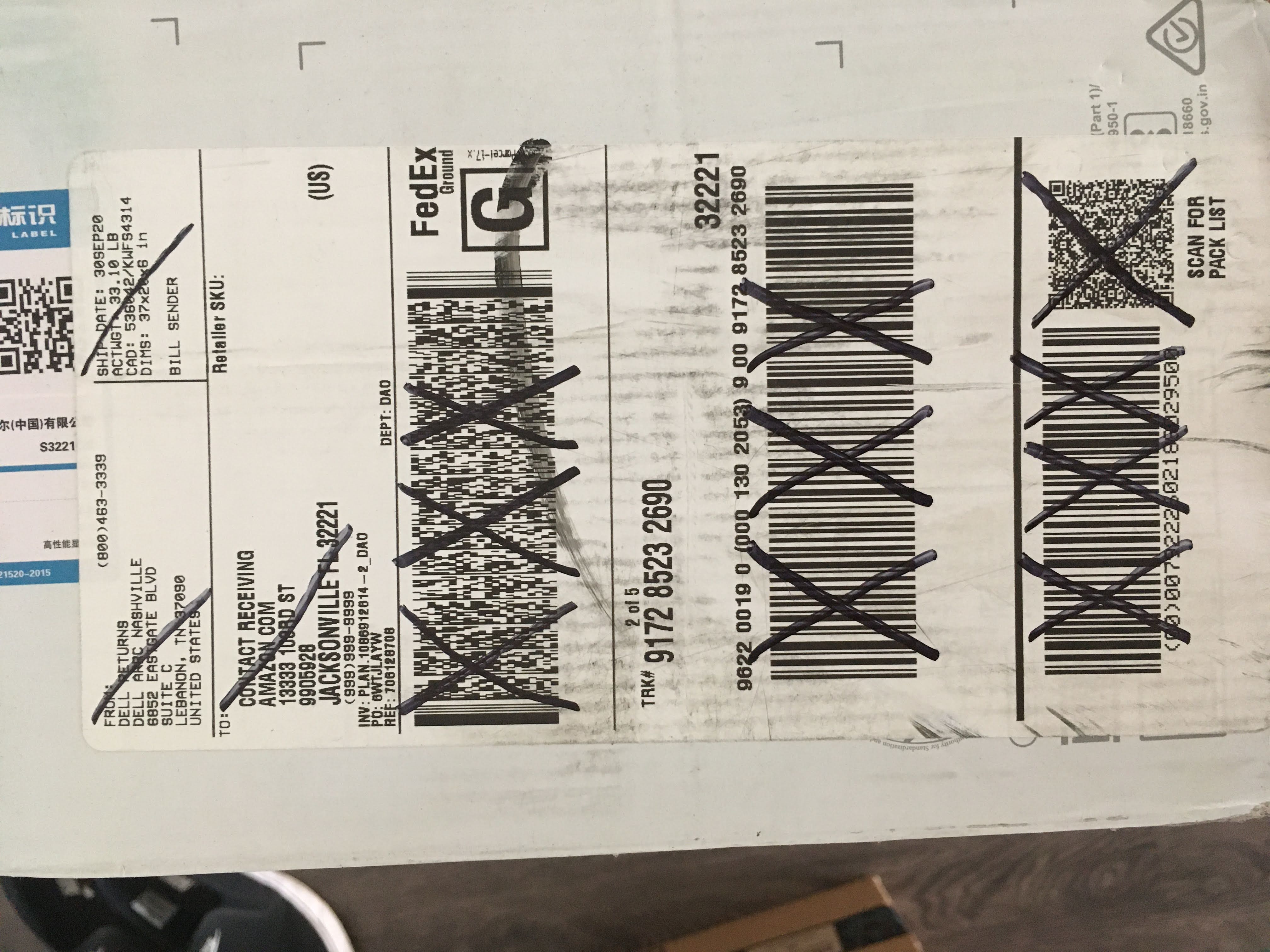