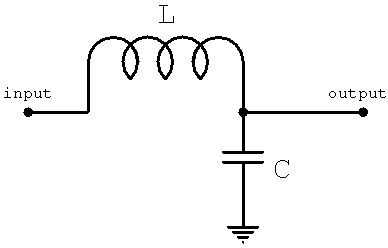 The impedance of a capacitor is Z_C = 1/(C*s) where C is the capacitor's inductance in Farads, s=j*w, where j=sqrt(-1) and w=2*pi*f where f is the signal frequency.

Noting that the topology is that of a voltage divider, the transfer function for the filter can be written as

Let's look at a real-life application of this circuit. The LM25574 is a chip that is used to convert a high input voltage (~12 VDC) into 5 VDC. The datasheet for this part has a helpful "Typical Application Circuit and Block Diagram" showing how it's used.

I've taken a portion of that circuit, simplified it, and added some color to make it easier to understand. I colored the chip light blue, ground is green, and the output of the LC low pass filter is red. This chip outputs a square wave on its SW pin at 1 MHz, and the LC filter is used to filter this so that only the DC component gets to the output. This filter is responsible for keeping the output of this circuit at a steady 5 VDC.

Let's see how well it should work. The cutoff frequency of this circuit is

Right away we can see that any signal above 3.4 kHz will be attenuated by at least -3 dB. Since 1 MHz is much larger than 3.4 kHz, we can guess that it will be greatly attenuated by this filter.

H(0) = 1 so the DC component of the output will pass through unaffected. |H(j*2*pi*1e6)|=1.1514e-5=-98.8 dB! The 1 MHz component of the signal will be 98.8 dB less than it was in the original signal! The harmonics of the original signal are all at frequencies higher than 1 MHz, so they'll all be attenuated even more! Effectively, this filter takes in a 1 MHz square wave and outputs a smooth, constant 5V. Perfect for powering other circuits!

This entry is part two of a three-part series explaining how DC-DC buck regulators work.