Setting up Bitbucket Pipelines with Ruby on Rails

I've been wanting to set up continuous integration for my personal projects for a long time. It's one of those things that seems super cool and useful but a bit too nebulous for me to actually sit down and devote any time to it. This weekend I finally did it, and it was a lot harder than it should have been.

Example bitbucket-pipelines.yml for Ruby on Rails

Here's my bitbucket-pipelines.yml file for reference:

Getting Secrets into Bitbucket Pipelines with S3

So how did I do it? Well I used awscli to download my secrets from S3 into the right spot in my application's directory. In Pipelines, the environment variable $BITBUCKET_CLONE_DIR tells you where your repository is cloned into the docker image, so I used the line below to set that up:

The next problem that popped up with doing it this way is that awscli needs my AWS credentials in order to download anything from my private S3 bucket. You can provide your credentials to awscli with two environment variables named AWS_ACCESS_KEY_ID and AWS_SECRET_ACCESS_KEY. Add those two environment variables in your repository's settings like this: 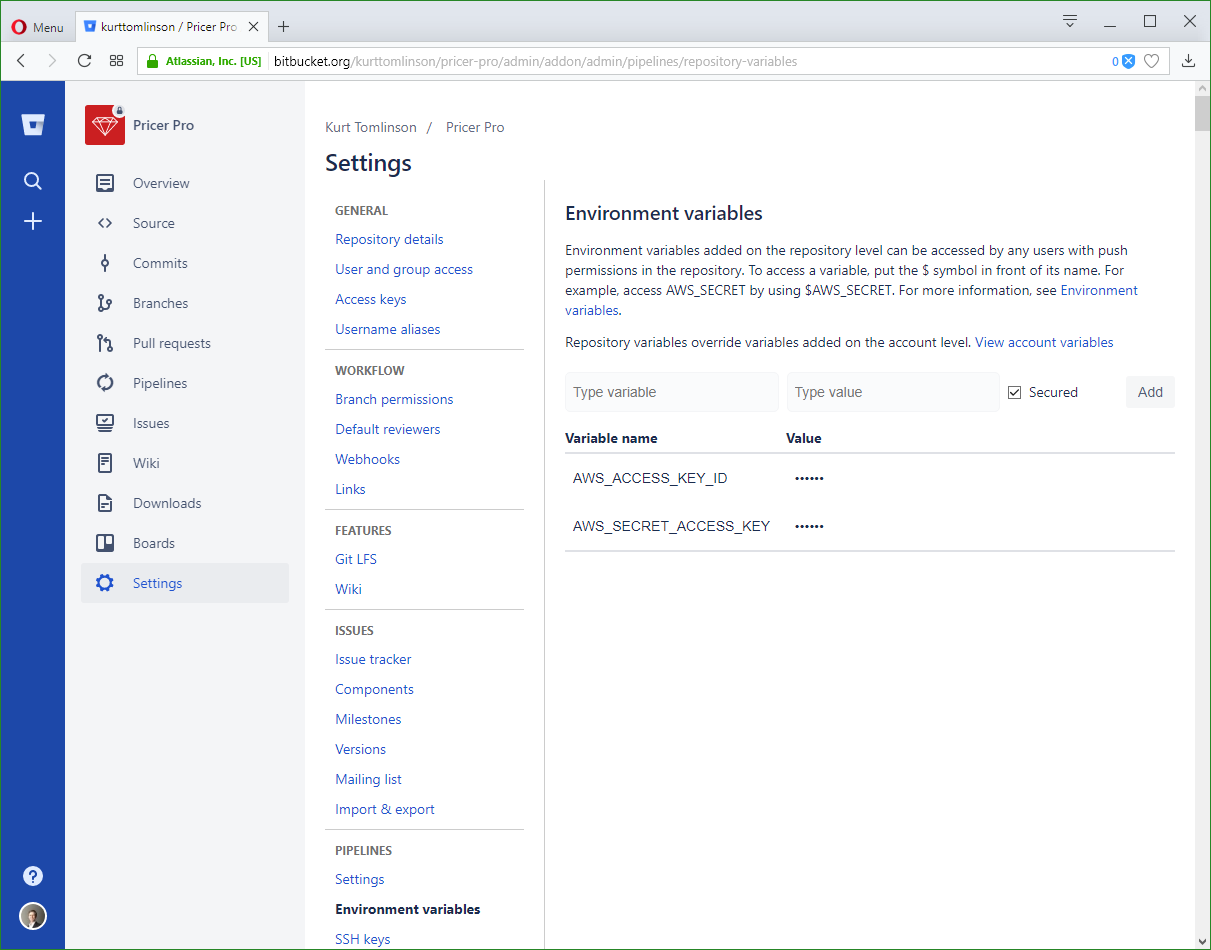 Adding secured environment variables to Bitbucket Pipelines is super easy once you find the right page.

Make sure that you check the "Secured" checkbox!

The next problem I had was with using utfmb4 encoding on MySQL. I kept getting the error "ActiveRecord::StatementInvalid: Mysql2::Error: Incorrect string value..." when my rails tests ran. I thought this was weird because my migrations specified utf8mb4 so I could support emojis and other 4-byte Unicode characters.

It turns out that fixing this was somewhat easy. Out of the box, Bitbucket Pipelines creates your database table for you. The problem is that it chooses the encoding of that table for you, and I couldn't find any documentation about how to change the default encoding. To fix this, I just had to have rails drop, create, and migrate my test database itself:

Finally, Bitbucket Pipelines has a cool caching feature that's supposed to speed up things like running bundle install. Unfortunately, the documentation for getting Pipelines caching working with Ruby on Rails is a bit odd: 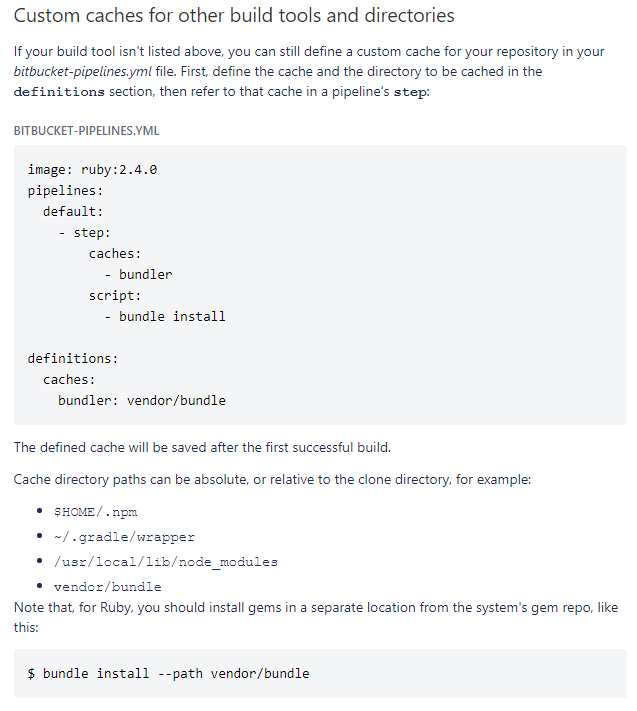 The caching documentation for bundler on Bitbucket Pipelines is a bit inconsistent.

The example YAML file runs bundle install but then they have a note that says you should run bundle install --path vendor/bundle. Which is it? It's the one with --path in it.

Here's the important stuff about caching in Bitbucket Pipelines:

For me, caching my bundled gems sped up my build time by about 2 minutes:

So, I had three big road blocks to getting Bitbucket Pipelines working with Ruby on Rails: 1) getting my application secrets into the Pipelines build securely, 2) making MySQL use the correct character encoding, and 3) caching my bundled gems for faster build times.

I hope this information is useful for you. If it is, or if you have any questions, let me know in the comments below!


← Older
The Best Movies from 1987 to 2017 According to Pirates
Newer →
Connect Four in Ruby on Rails and Vue.js