The USDA publishes tables showing how much Americans can expect to spend on food each week. The tables are broken down by family size, gender, and age. They're further divided into four categories: thrifty, low-cost, moderate-cost, and liberal. These charts are updated every month. I first learned about these tables from an article about celebrities trying to live like they were on food stamps.

Interested in seeing how I compared with the USDA guidelines, I fired up Mint and looked at my own spending habits. I clicked Trends >> Spending Over Time >> Show transactions that match any: "Groceries". The results I got are somewhat interesting and complicated.

The first complicating factor is that I moved from Clark, Philippines to Sunnyvale, CA at the beginning of September 2014. The second complicating factor is that I moved from Sunnyvale, CA to Dallas, TX at the beginning of March 2015. Sunnyvale has one of the highest costs of living in America, whereas Dallas's cost of living is pretty close to average. This affected my grocery purchases by inflating my expenditures for the first couple months in each location as I bought non-perishables such as spices and cooking oil that I did not bring with me when I moved.

One other thing to note is that I'm not including money spent on food at restaurants. This money should be included, but it's pretty misleading. I often split the bill with friends and get reimbursed in cash, or I'll treat friends to meals in exchange for their help with moving or working on my car. In these cases the money Mint says I spend on food either isn't actually an expense (because I'm getting paid back in cash), or it belongs in a different category (like auto repair). 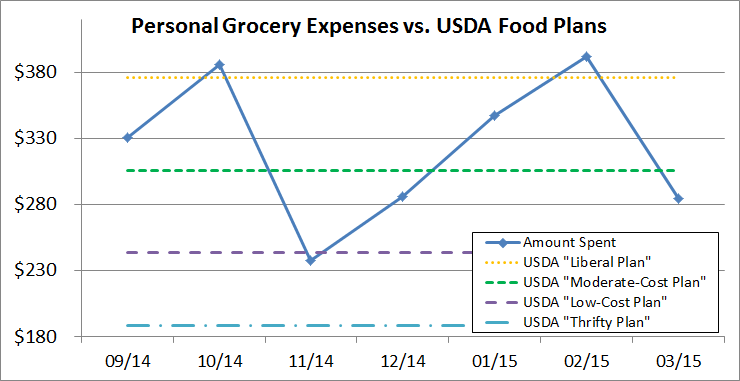 The "moderate-cost plan" for me is $306 per month, and the "liberal plan" is $376 per month. Over the seven-month period from September 2014 through March 2015, I spent $323 on average at grocery stores. This puts me in between moderate and Liberal. When including restaurant and fast food purchases, I'm probably near or above the liberal plan. I'm going to look at my food purchases more carefully in the future and use the USDA plan guidelines as benchmarks to see if I'm wasting money on restaurants or need to cut back on any luxury food items like alcohol or sweets.


← Older
MERS and Epidemic Curves: Followup
Newer →
The Currency Market Is Not for Investments