There are a number of misconceptions about 2.4 GHz and 5 GHz Wi-Fi. Let's clear those up. 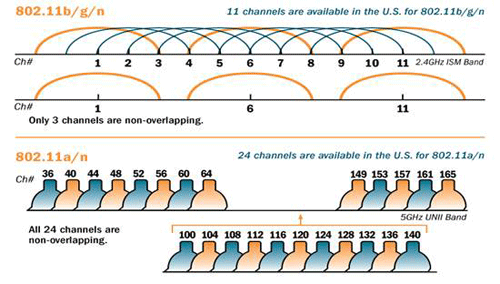 *The ranges given here aren't 100% accurate. The way the FCC splits up the electromagnetic spectrum is complicated.

Microwaves are a huge source of interference for Wi-Fi. Microwaves heat up food by showering it with 2.4 GHz radiation. Some of this radiation leaks out and confuses Wi-Fi receivers when the microwave is running. Cordless phones also often operate on the 2.4 GHz band. The 5 GHz band is used by fewer devices, so the amount of interference on it is less.

The radio engineer formula gives the path loss in db: